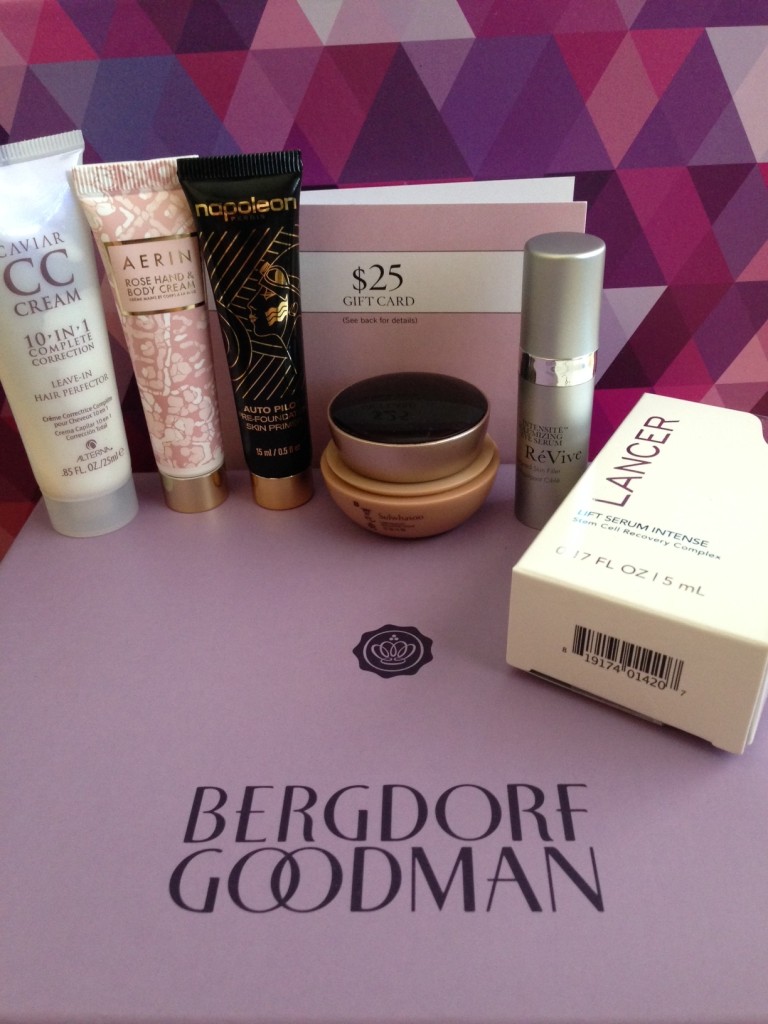 I won’t bury the lede on this one. I’ve already canceled my GLOSSYBOX subscription. Since I can pick it up again whenever I want, that’s not a huge deal. The truth is, I canceled this box before I even got the first one. WHY? Because they charged me for a second box before I even got my first box! What da hell?! It was probably just a billing cycle thing, but it bothered me. Let me decide for myself if I’m continuing the subscription! I’m the decider!!

We were pretty excited the day it came. We got less excited when we saw there weren’t any cosmetics in the box. Since this is a collaboration box, I think that one is on me. I don’t know. I canceled my Birchbox because I got tired of getting so many freaking serums. This box is basically all serums and treatments.

ALTERNA CAVIAR CC CREAM – This is a leave-in conditioner that I did not realize was a leave-in until I had already taken it into the shower. I didn’t end up using it that day in the shower. I used it a couple days later when my friend, Temeka, was braiding my hair. She used this product to tame and smooth my hair while she was working on it. By the time we were done, most of the tube was gone! I ended up having this treatment in my hair for about four days. I can say for sure, my hair was super soft and lovely when I took my braids down. It smelled real good, too. Rilllll good.

AERIN BEAUTY ROSE HAND & BODY CREAM – I’m taking this to my grandma when I see her later this week. She’ll love it. I hate it. We feel the same kind of ways about Bill O’Reilly.

NAPOLEON PERDIS AUTO PILOT PRE-FOUNDATION SKIN PRIMER – Oh. Yay. More primer. I’m sorry, but this is not even the nicest primer I’ve ever used. It’s fine. There wasn’t anything wrong with it, I just didn’t feel like it was anything special. The sample was really nicely sized, so that’s cool. Primer is primer, ya know? I don’t think I’ve ever bought a full tube of any kind of primer. It seems like they just always find their way into my makeup stash.

SULWHASOO TIMETREASURE RENOVATING CREAM – The full size jar of this cream costs $400. FOUR HUNDRED DOLLARS. It’s not like I don’t like expensive stuff. I do. A lot. But, whoa, that’s Brangelina priced. This little jar of moisturizer pretty much made up for my other quibbles with the products in this box. I don’t know when was the last time YOU used a $400 face cream, but for me, that last time was never. It’s so nice. It’s so, so, so nice. Everything about it is perfect. It smells like it’s going to work. You know what I mean? I was really impressed the morning after the first time I used it; my skin looked noticeably healthier. It’s cool to see a product work like that. Again, the product size in the box was really generous. I’ve been using it almost every day for several days, and I have plenty of it left. I’m going to be sad when it’s gone. Sad and ugly.

REVIVE INTENSITE VOLUMIZING EYE SERUM – It’s nice! I really like it because it’s not greasy. I have problems with greasy eye treatments. This is another product that seemed to work practically overnight. My eyes have seemed tighter, brighter, and more awake. I have to use such a tiny amount of this serum, I have lots of this sample left, too.

LANCER LIFT SERUM INTENSE – This facial serum is supposed to contain pure gooooooold. I’m into that! How luxurious, right? That’s some Goldmember shizz. Maybe it’s Mariah Carey style? I bet you she likes gold just as much as Goldmember does. Like, I bet you a million dollars she would love it if a dong was painted gold.

BERGDORF GOODMAN $25 GIFT CARD – Hey! Here’s something! By the time I got this box, this gift card was nearly expired. Like, two to three days later it was unusable. Here’s another thing! I was planning on using this gift card at an actual BG later this week, but my gift card has expired already. I didn’t even see that it expired until it was too late. HERE’S ONE LAST THING! I’m pissed! I didn’t even have a week to use my gift card. That’s shitty. I’m not done with it either. I’m fully making some phone calls about it today. Updates later!

The product quality was great. Admittedly, it was pretty fun to be able to try such a lovely array of luxury priced products. Overall, the box was nice. Nice enough that I didn’t email GLOSSYBOX and ask for a refund for that second box. My next box is already on its way, so we’ll see if the regularly curated box is more up my alley. I want lip liners and nail polish!

Get your own GLOSSYBOX HERE.